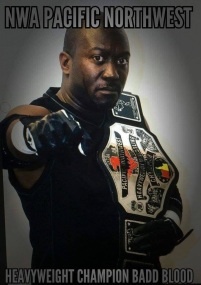 Bad Blood Bj Darden is an independent wrestler who has wrestled for many different promotions over the years. Darden is currently the NWA Pacific Northwest Heavyweight Champion and takes a lot of pride in holding such a historic championship. He known for being a hard worker inside and outside of the wrestling ring. He has aspirations to travel all over the world to wrestle and show everyone what Bad Blood is all about.

By following the Independent Circuit and reading about the wrestlers and their storied careers, I am able to catch up with some of them and conduct an interview from time to time, which allows them to share with us their story. Recently I was able to catch up with Bj Darden and he was gracious enough to put a halt to his busy schedule to discuss his career, future, and accomplishments. This is what he had to say.

When did your pro wrestling career begin?

My Pro Wrestling debut was in 1997 in Montclair Ca.

What federations have you worked for along the way?

How could you explain the life of an independent wrestler?

It’s an adventure to say the least… I spend more time in airports and hotels than I do at home. But honestly, it’s worth all the bumps, broken bones and the loss of free time. The looks of the fans faces after a match makes it all worthwhile.

Do you pay attention to other federations or follow other wrestlers?

What would be your dream match? ­

I’d love to work with ACH. He’s an amazing worker and i think we could kill it in the ring.

What would you say is your greatest accomplishment in the sport of professional wrestling?

I’d say winning the NWA Pacific Northwest Heavyweight Championship and making history in the process. The title has a historic background with over 40 years of memories behind it. Guys like Playboy Buddy Rose, Bryan Adams, Matt Bourne and CW Bergstrom paved the way for the Northwest and it’s an honor to hold this title.

What is your most memorable match? ­

I was in an 8 man tag match and i had to face both Devon Dudley and Super Mex Hernandez. . They are amazing guys and I learned a lot from them in that match.

Who are/were some your favorite wrestlers and why?

My favorites were guys like Ric Flair, Curt Hennig and Arn Anderson. I liked Flair because he is the ultimate showman. He is always spot on and he’s the best on the mic; bar none. Curt Hennig always had my interest
because he was by far one of the best in ring performers of all time. Lastly, Arn Anderson is high on my list because he is the best tag team wrestler of all time. He’s a great leader and team player. I urge anyone if you want to learn how to be a great tag team wrestler watch his matches.

What needs to be accomplished in your ­eyes to be able to look back and call yo­ur career a success when it’s all over?

For me it’s knowing that I helped shape the career of another worker. When I started in the business, I was taken under the wing of a veteran who taught me how to treat this business as a business and to always treat it with respect. Yokozuna was a great mentor and I’d like to pay it forward.

If there is one thing I’d like to say in closing it would be this. Wrestling is what saved me. It shaped my life not only in the ring but also out of it. In this business it’s what you put into it that defines you.

***Hopefully you enjoyed this interview and learned some new and interesting things about Bad Blood Bj Darden. I would like to personally thank Bj for taking the time to share with me his stories so I could share them with all of you.

*** Bad Blood Bj Darden can be seen at many promotions such as NWA Blue Collar Wrestling and Alpha Omega Wrestling that is running a two night event called Pride of the Ring, which includes BLK Jeez (CZW Champ) on May 16th thru 17th.

***Come follow my sports site fantasysportsaddiction.com and all my editorial articles along with many interesting minds at the eWrestlingnews FB Fan Page…Come join in and let your presence be felt!