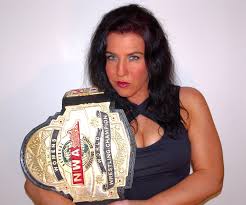 In the world of professional wrestling the independent circuit is a very active alliance that are referred to as Indy promotions or Indies. The advent of the Internet has allowed independent wrestlers and promotions to reach a wider audience and make it possible for wrestlers regularly working the Indy circuit to gain a measure of fame among wrestling fans online. Additionally, some of the more successful Indies have video distribution deals, giving them an additional source of income allowing them to reach a larger audience outside of their local areas. For these wrestlers, this is a way of life and the making of a career they love to be involved with.

We all know about the list of Indy wrestlers such as Samoa Joe and A.J. Styles, but there are many more, male and female, who are making a career in the circuit, and should get their proper due. By following these wrestlers and reading about their storied careers, I was able to catch up with some of them and conduct an interview which allows them to share with us their story. My first interview was conducted with Queen of VALKYRIE Women’s Professional Wrestling Kacee Carlisle.

Kacee Carlisle (February 11, 1980) is a female wrestler who has wrestled prominently throughout the Independent circuit. She has wrestled for many promotions including NWA, VALKYRIE, 1CW, Elite Pro, OMEGA, ACW, and WXW-C4.
Kacee began watching wrestling at the age of eight, fell in love with the sport, and decided immediately that she too would one day be a professional wrestler. Kacee broke into the wrestling business in 1998 as a manager affiliated with wrestler Shorty Smalls. Due to commitments away from the ring her appearances were few and far between until 2003, when she resurfaced at a HoPWF show in Hagerstown, MD. She continued to manage on a regular basis for the next two years until July 30, 2005 when, on a joint WXW/VCW show held in Olney, VA, Kacee wrestled in her first match against Krissy Vaine. Since then Kacee has worked hard to earn the respect of both her peers and the fans, becoming known as one of the most traveled, hardest-hitting and toughest women in the ring today.

Kacee’s signature style of old school roughness combined with a touch of femininity makes her easily recognizable to fans and opponents alike. To date, Kacee has wrestled in 18 different states and has held numerous championship titles along the way, most notably the prestigious NWA Women’s World Title.

Over the past several years Kacee has been voted the Wrestler of the Year for several promotions, wrestling news websites and fan polls. In 2011 she was ranked #46 in PWI Magazine’s Top 50 Females in professional wrestling, climbed in the ranks to #40 in 2012 and in 2013 made a huge leap in the rankings to #7. Kacee continued to enjoy a high ranking in 2014, coming in at #18. She is also ranked in PWI’s online ratings and monthly magazine ratings on a regular basis.

You’re not going to see Kacee Carlisle climbing to the top turnbuckle, flying through the air or launching herself off the ring ropes anytime soon. The tough Mid-Atlantic wrestler is not in the ring looking to win any acrobatic contests. She’s in the ring to beat the crap out of somebody!

So forget the frog-splashes and 450-degree flips. You won’t find them in Kacee’s arsenal of weapons. Instead, you’ll find plenty of forearm smashes, DDTs, suplexes, clotheslines and other bone-shattering moves designed to beat up and devastate whoever dares to step into the ring against her!

Recently I was able to catch up with Kacee and ask her if she were available for a quick interview. She was gracious enough to put a halt to her busy schedule to discuss her career, future, and accomplishments. This is what she had to say.

How long have you been wrestling?

I have been wrestling for nearly 10 years. My first match took place on July 30, 2005 in Olney, VA and was against Krissy Vaine. Prior to my in-ring career, I worked as a manager for some time, beginning in 1998. My appearances were very sporadic until 2003 when I began working much more regularly. My interactions during matches continued to grow and led to the start of my wrestling career in 2005.

What would you say is your greatest accomplishment in the sport of professional wrestling?

I consider that to be my reign as the NWA Women’s World Champion. To hold a Title with such a rich and important history to our business, and with such a legacy, in itself is an honor. I am proud to say I had a lengthy reign; 462 days as Champion. For me, to grow up as an obsessed professional wrestling fan watching it on TV every time it aired, reading about it in every magazine I could get my hands on and buying as many tapes as I could, made me feel lucky enough to have a wrestling career in the first place. The fact that I became NWA Women’s World Champion was such a humbling and amazing experience that will forever live on in my mind.

As an Indy wrestler, do you pay attention or follow other federations?

Absolutely! I pay attention to everything I possibly can. Being an independent wrestler, I have to be! I am a very firm believer in being as educated as possible about the business as a whole. I take my career very seriously and to me, part of that means being as familiar as possible with promotions in various areas, my peers, etc. After all, I want to work in as many areas and with as many different companies as I can. It’s part of my job to be familiar with the company, their product, their roster, etc. All of those details end up playing a role in whether or not I feel it’s a company I would like to have a chance of being part of.

What would be your dream match?

My dream match would have been a match between Sherri Martel and me. I watched Sherri as a fan growing up, both her in-ring career and as a manager. I always had an admiration of her and her talents. She was truly great, and I would have loved the chance to share the ring with her and have that experience.

What separates you from other female wrestlers?

Thinking of me as a complete package is what could separate me from the pack. I believe myself to be a unique mix, in my look and my style, as well as a business woman. Look-wise, I’m a decent sized girl with some size and strength, but at the same time I maintain a fairly feminine and-sometimes-softer side as well. In the ring I’m a hard hitting, snarling, in your face obnoxious bad girl who is willing to do anything I need to in order to get the win,  but still not afraid to mix it up with different styles of wrestling and different opponents to meet the challenges I face. Outside of the ring my focus is always on my work ethic and professionalism. I am always working on my career in some way, whether it’s seeking bookings with new promotions, working on my website or new merchandise, studying match videos, helping to promote the events I’m part of, or participating in interviews! I also do my best to be a true professional in every way, something I take very seriously and pride myself on.

What needs to be accomplished in your eyes to be able to look back and call your career a success once it’s over?

Honestly I never expected to reach the level of success that I already have. If you had told me when I was that little girl watching TV or even the night I wrestled my first match that I would accomplish some of the things I have, I would have laughed at you. Right now I’m looking at the end of July, as that will mark my 10 year anniversary being an active wrestler. Reaching that point has been a goal of mine. I also want to wrestle in as many different states as I can, as well as going international somewhere at some point. I’ve been so lucky and fortunate; all I can hope for is that it continues.

***Hopefully you enjoyed this interview and learned some new and interesting things about Kacee Carlisle. I would like to personally thank Kacee for taking the time to share with me her stories so I could share them with all of you. For more info on Kacee Carlisle you follow her on her site, kaceecarlisle.com and YouTube channel youtube.com/user/KaceeCarlisle.

***Come follow my sports site fantasysportsaddiction.com and all my editorial articles along with many interesting minds at the eWrestlingnews FB Fan Page…Come join in and let your presence be felt!