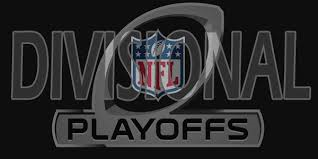 Well it’s almost time for another round of NFL Playoffs and a weekend that should leave us in a pool of excitement. The level of talent left in these 4 games should live up to their reputation and should not disappoint. If playing against some stiff competition wasn’t enough, Mother Nature has voiced her displeasure for the NFL Playoffs by sticking all 4 games into a pattern of frigid temperatures and bone-crushing wind chills cold enough to make an Eskimo shiver. This weekend is definitely going to separate the men from the boys, helping the crowd bring back the forever loved Pedro Martinez chants of, “Who’s your Daddy.” Below is my attempt to preview and pick the winners for all four games.

How many people expected the Ravens to go into Pittsburgh and knock out the Steelers in front of their home crowd? Well that is exactly what they did and now have their sights set on knocking the arrogance out of New England’s mouth. New England has a 12-3 playoff record at home during the Belichick/Brady regime, but 2 out of those 3 loses came from the Ravens. The Ravens seem to have found something to be able to stop Tom Brady’s air attack by constant pressure up the middle making him make bad decisions. We all know what happens to Tom when he doesn’t get his way. He acts like a spoiled little kid on Christmas morning that cries because he didn’t get an Xbox. However, if that pressure doesn’t get through, Mr. Brady will be slicing up the Baltimore defense quicker than a junkie that hasn’t made a sponsor meeting in over a year. It will not be pretty for the 24th ranked defense allowing just under 250yds a game and a total of 22 touchdowns. Here are some more interesting keys to the game:

• Forsett has been slowing down in the 2nd half of the season and was held to only 36 yards last week. Patriots allowed 104.3 rushing yards a game, but only 6 TD’s during the regular season.

• Julian Edelman has made Wes Welker an afterthought in the slot. 92 catches this year, 105 last years. Enough said!

• There will be so much trash being thrown around on the field by Revis and Smith that New England had to make Sunday a collection day this week.

It’s Superman versus the Legion of Boom. Unfortunately, in this fairy tale, the Seattle Seahawks are Cam Newton’s kryptonite. Did the Panthers start the season off well? No. Did they perform well down the stretch? Yes they did. However, if the Panthers thought the Cardinals defense was a tough nut to crack, they’ll be in for a rude awakening here in the divisional round when they head to Seattle to play against the defending Super Bowl Champions. The Seattle defense has kicked their engine into 4 wheel drive and has been crushing any terrain that gets in their way. Richard Sherman is showing why he was on the Madden cover and why he is the best cornerback in the game. I have to be honest; I have as much confidence in Carolina putting up a fight in this game as I have in Barak Obama turning our country around. Here are a few tidbits from this game below.

• Carolina’s 2 top receivers, Olsen and Benjamin, had a total of seven catches for 70 yards and no scores last weekend

• Seahawks conceded an average of just 153 passing yards per game, but did give 11 TD’s to opposing TE’s which was 3rd most in the league.

• Marshawn Lynch has touched the ball over 1,300 times over the past 4 seasons…He has been banged up a little bit this year, but this is the playoffs and the beast is about to be unleashed.

This is the matchup in the NFC everyone is looking forward to because of the many question marks surrounding it. Will Tony Romo continue his MVP play or will he falter in the confines of the cold weather? Will Aaron Rodgers be able play through the pain and put on a show like only he can do? Either way you toss it; this should be a great game between two offensive powerhouses. These 2 storied franchises haven’t played in over 50 years in the playoffs. I think Dallas has the upper hand in the trenches, but we have seen in some games where their line has disappeared. Green Bay on the other hand takes games off on defense on occasion. However, Morgan Burnett will be patrolling the field looking for a star to catch and leaving Dez and Terrence to think about their next step. I really think this game will come down to who scores last. Here are some tidbits from this game below:

• Clay Matthews has led the run stopping surge since he took over the Middle.

In a chess match between student and teacher, Andrew Luck brings his Colts to Denver to battle Peyton and his Broncos. While Peyton Manning is the general of the NFL, Andrew Luck is leaving his stamp on the NFL as the next guy in line to carry that torch. The Colts took care of business against the Bengals last week, who were frauds and a poor excuse for a playoff team. They did it mainly through the air, which is the complete opposite of the counterpart. The Denver Broncos have taken a new identity over the last few weeks and are starting the run the ball behind C.J. Anderson. This guy has been a gem averaging over 80+ yards in the last 6 games right off the practice squad and has afforded Peyton to rest up over the last few weeks and get ready to explode in the playoffs. Here are some tidbits below from this game:

• C.J. Anderson has 80+ rushing yards six times and scored a total of 10 touchdowns over the last 6 games. • Peyton Manning looks slow and out of sync… In his last four games, Manning has thrown twice as many interceptions as touchdowns while dealing with injuries and illness.

• Luck has thrown for 360 YDS/G in his four playoff starts. The emergence of RB Dan Herron was a major factor in their victory over the Bengals as he had 141 total yards along with a rushing touchdown

Come follow me on Facebook at https://www.facebook.com/extremesportsaddicts23 or on Twitter @TCutillo23 for breaking news, stats, comical stories, and weekly projections. Also tune into Spice Sports on spiceradio1200am.com @9:30 pm (est) every Friday night to hear my Weekly Fantasy Sports/ Sports Review Segment for all picks for the week and some interesting analysis from a great group of Knowledgeable Sports Enthusiasts.

***Also for all my secret wrestling fans out there, come follow my new editorial column at eWrestlingnews.com..This site offers a ton of content and breaking news stories that pertain to the past and present business.