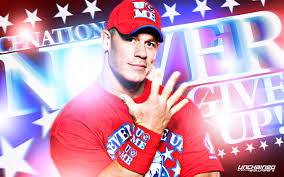 John Cena is perhaps the most decorated world champion in WWE history, but does that make him the company’s greatest champion?

combined days as a WWE Champion behind Bob Backlund, Hulk Hogan and Bruno Sammartino, according to the WWE. Cena is still only 37 and is one more title victory away from tying Ric Flair‘s record of 16 world championships, which is widely considered the most in professional wrestling history.

The former Doctor of Thuganomics is the WWE’s golden boy and franchise player. He has done everything the company has asked him to do and gives back to the fans of all generations in ways that may never be duplicated in the world of professional sports. This is evident based on his record number of wishes (400) granted through the Make-a-wish foundation and countless fan interaction. Along with his out of the ring accomplishments, he is still one most dominant and charismatic figures the WWE has ever seen.

Ever since the WWE chose to go towards a PG rating for their production, John has been an integral part of its success. The kids adore him more than the Hulkster in the 80’s and Brett Hart in the 90’s. He has been fixated on making sure the fans get to see a great show and will do everything in his power to get them involved. Love him or hate him (older fans love to hate him while younger fans love him), Cena has beaten just about everyone on the roster at least once.

The flipside to all of the accolades and accomplishments is the hatred of his character based on his predictability. Throughout the

last 5 years or so John Cena’s main event involvement or title picture angle has constantly been the main storyline, leaving the WWE universe with memories of the Hulk Hogan era of constant wins from the 80’s. One of the greatest parts of the wrestling business is the intrigue and suspense that goes behind creating these storylines to keep the fans always guessing. Without the suspense comes boredom, which is where the universe lies when it comes to Cena.

With all due respect to John, the outpouring of hate and deception from the WWE universe towards his character is not entirely his fault. The countless superstars who had left or retired from the company left the WWE with no other choice but to use him to soar into the future. Until CM Punk dropped his pipe bomb, there were no real candidates in their eyes who had the age, charisma, and image to be the franchise like The Rock and Stone Cold. I firmly believe he will go down as one of the top 3 wrestlers of all time based on title reigns, charisma, longevity and style. Obviously, I am sure I will get hammered for saying top 3 and saying he doesn’t deserve to be hated, but before you comment take a look as these questions below.

I honestly think if you answer these questions with an unbiased opinion, your feelings towards John Cena may be lead into a more positive direction. Either way you slice it up, Cena gives you 2 options, Love Me or Leave Me Alone!

One thought on “Word is Life: Controversies and Criticisms of C-Nation”