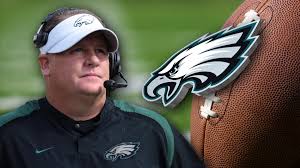 Chip Kelly has taken the National Football League and its followers by storm. In some ways, Chip is revolutionizing the sport into what everyone involved ever wanted; a high scoring and exciting game, with very little timeouts or huddles.

The journey started in D-1AA as a successful offensive coordinator who found himself the most coveted college football coach in America. In his first game as the head coach of the Oregon Ducks his team managed just 153 yards and scored only 8 points. A season ticket holder wrote him asking for his money back. Kelly was so embarrassed and disappointed that he mailed him a personal check for $439.

In his four years at Oregon, Kelly built an impressive resume as he turned a good program into an elite powerhouse. During his tenure, he coached his way to a 46-7 record, appeared in four consecutive BCS Bowl Games and in 2011 came one possession short of winning the national title. While at Oregon, Kelly developed his own methodical philosophy and one that would eventually turned heads all across the NCAA. Traditionally, a typical college team would run 55-60 plays per game. Kelly, always looking to push the envelope of modernization, wanted 80.

After years of dabbling into the conversations of bringing his style to the NFL, he finally made his mind up when the Philadelphia Eagles hired him away from Oregon in January 2013 to rebuild their dwindling franchise. The doubters were everywhere stating things to the tune of his up-tempo offense wouldn’t work in the NFL and voicing the concerns of lack of confidence within the Eagles locker room. In his first season, Kelly brought his offensive philosophy to the NFL and finished 10-6 with the league’s 4th best offense, giving those same doubters something to think about. They paced the league with 99 plays of 20 yards or more, RB LeSean McCoy led the league in rushing and Pro-Bowl WR DeSean Jackson posted career best receiving numbers. While taking nothing away from these fantastic accomplishments, Kelly’s biggest impact may have been on the Quarterback position.

It is nearly impossible to measure a QB’s impact on a game, but a QB is the main fuel behind the engine that continually wants to run. Without Kelly, Nick Foles posted a middling 79 QB rating, good for 23rd in the league. Under Kelly the rating grew to 119.2-making him the league’s most efficient QB. Foles went on to post some of the most fascinating numbers ever, including a 27 TD-2 INT ratio that is remarkable for any QB, let alone a beginner.

The Chip Kelly Project is the current blueprint for the entire NFL. His schematics have included everything from early night bedtimes and nutritional smoothies for stability. He has made everyone from the opposing teams and coaches, to the valuable men in pinstripes step up their game as they all try to keep up with his evolving system. Chip Kelly continues to be a man of very few words and expressions, but the one constant that continues to impress is his football intelligence.  Everyone has a brain, but just like his football system, the quickness in which the brain can process information is the key to continued success!