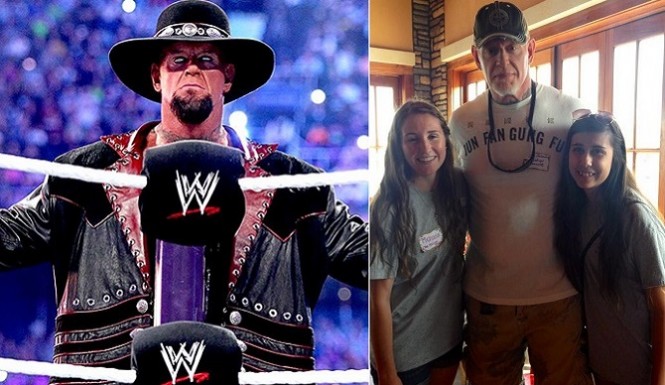 Lesnar and Paul Heyman were the two that Undertaker chose to end the illustrious streak. The looks and screams from the fans on that day can still be seen and heard from miles away. Ending the Streak wasn’t a popular idea, but now Lesnar is the hottest WWE superstar to date. He will be carrying the company for the next few months and the ratings are higher than ever before when he is on-screen.

Many WWE legends think Taker earned the right to retire with his streak intact. Stone Cold Steve Austin was just one of the wrestlers who thought the streak was so special that it should have remained unbroken.

Since WWE’s inclusion of Sting in their future plans, he has been very adamant on wrestling the Undertaker at WrestleMania 31. “Sting has been very vocal over the Summer Slam weekend that he wants to wrestle The Undertaker. “He’s pushed it hard in every interview,” states Dave Meltzer on wrestling observer radio.”

The unfortunate part about this whole scenario is that Undertaker looks to be in very bad health. In a recent picture on Twitter, two young girls got to meet the Dead-man and his appearance speaks for itself. To be personally honest, I think the last match was all the evidence we needed to see he was done. Something wasn’t right as his ring presence wasn’t as flawless as we are accustomed to it being. This is the same guy that carried matches and taught his students while in the ring. Unfortunately, it looked during that match the student was teaching the teacher.

Our memories of the Undertaker will not be the end of the streak, but instead the many vivid moments he has given us over the years. The years of constant punishment being sustained inside of the squared circle looks to have finally taken a toll on the Dead-man, leaving us to wonder if it is true. Is the Dead-man, finally dead?