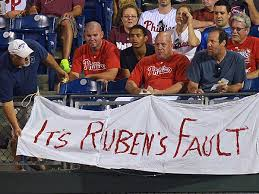 This is usually the time we as Phillies fans tend to get excited thinking about the prospects of what the season holds. As we all brace through this brutally cold and active winter, the sound of excitement for this upcoming training camp is nonexistent and the hopes of this fan base are lower than the amount of salt still left in the dunes at Penn dot. Usually in the month of February, we are predominately talking about if we will be a division winner or a wild card team come October, but this year we are already looking at 2015. There has been talk of when we will be able to trade Ryan Howard and Cliff Lee, if we paid Cole Hamels too much, and if we will ever have a farm system again. These are all legitimate concerns and the organization has not done anything to ease our minds going into the future.

The city of Philadelphia is said to be a bandwagon fan base, but it is extremely hard to stand behind a team who shows they have no direction. For Example, the Phillies have been shopping all offseason in the Five Below store, hoping to cash in on a gem because we all know how often that happens, right? I’m still astonished that they are extremely enthusiastic about the signing of Bobby Abreu

and how he will be able to help this year. Bobby Abreu, really?..really?…Also, not to be forgotten we resigned John Mayberry Jr. and infielder Ronny Cedeno to fill out our bench….While I’m not a huge fan of signing Marlon Byrd, I do think it could be a decent move and add a little pop to our lineup from the right side. The problem is this was the prize of the offseason instead of a piece, which is why I say it is unacceptable and a slap in the face of this well paying fan base. Obviously, I understand we won a World Series in 2008 and got back there in 2009, but once you establish yourself as a high market team it is your responsibility to remain cognizant of that status, making every effort possible to remain there as well.

The Phillies remain a popular ticket in this town, but nothing like they have through the span of 2008-2012, including a sellout streak of 257 straight games. Organizationally they have increased ticket prices and are far from hurting for money or revenue. As seen on http://www.forbes.com/teams/philadelphia-phillies/, the Phillies have the pockets to empty, but they seem like they are stuck in a mirage of 2005, where they constantly settled for less. If you were to break down the new Television deal they just signed, signing any player they clamor for should never be an issue. However, the Phillies always work under their own, self induced salary cap, but sometimes you have to spend more to gain more in return. For example, The New York Yankees (I know not my favorite either, but trying to prove a point), are a team who shows they need to remain primetime players to keep their fan base happy.  After an Idle October, the Yankees came back in full force by signing seven players for $319 million dollars. While I understand we are not the Yankees, I am merely trying to show the point of a franchise trying to win at all costs. They are not using excuses about the players they have being injured or not playing up to their contracts, instead they just sign new

ones and hope things turn around. In my opinion, when you have a hardcore fan base that you need to be successful, you cannot afford to put an inferior product on the field, without making a bona fide effort to turn things around.

I, for one, do not blame Ruben Amaro entirely for this downward spiral, as I still think the decisions are not entirely in his hands. The problem I do have with Ruben is he seems to hold onto the past for too long and when he decides to try and make his move, it’s too late. For example, last season would have been the perfect opportunity to turn this thing around by trading Cliff Lee, Jonathan Papelbon, and later in the season Chase Utley. Early into the season their values have never been higher and our farm system was in dire need for an overhaul. We all knew we weren’t going to contend, so why stay in this mired period any longer. It was possible, with the right moves, we could have contended again in 2 years. Instead we held onto them too long, as Papelbon imploded and we resigned Chase Utley to a contract to take him into the age of 40. Unfortunately, I feel like that was the chance to turn this thing around quickly, but instead it looks like we are in for a long 5 years of mediocrity and contending with the Marlins for 4th place. Boy have times changed!!!!!!!!!!!!

****As always I appreciate all comments and feedback….you can follow me @TCutillo23.