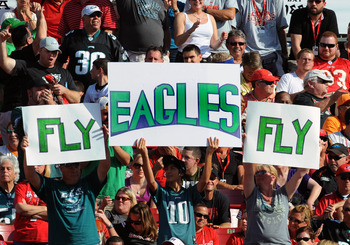 The Philadelphia Eagles came into this season with new life and a profound attitude under first year Head Coach Chip Kelly. After their dismal 4-12 seasons, Eagles management decided it was time for a change. They decided the Andy Reid ship had sailed after a 14 year tenure and it was time to float another boat into the dock. However, Howie Rosman and Jeffery Lurie didn’t just want any old boat, they thew their line out to the most sought after yacht in college football and reeled in Oregon head coach, Chip Kelly. It was a risk and reward power play that would have to settle for a few years before we were able to deem it successful. Either way, it was bold and brilliant, as it breathed new life into a city and a franchise that sorely needed the boost.

Along with the Head Coach, came a new philosophy and system that needed to be implemented and mastered before the team could worry about winning. There was a major roster overhaul and a new message being relayed to the veterans that needed to be adhered to in order for Kelly’s system to advance. All of these intricate things needing to be mastered before success would be accepted.

As you can see, there was a lot of excitement in the City of Brotherly Love this offseason, but we still maintained an expectation of minimal results, understanding we were in a rebuilding phase. The NFL can be very unpredictable at times, leaving us all scratching our heads in confusion. In the same token, the Eagles are currently sitting at 7-5 in the NFC East, trading blows with the Cowboys for the division, way before anyone thought we were ready to compete. This all leads to a dramatic turnaround, in which the Eagles will continue their way into the Postseason by making the playoffs and leading everyone to alter their expectations for the rest of the year.

As we gear into the final 4 games of the regular season, these are my top 5 reasons why the Eagles are going to give Philadelphia fans a special Christmas present with a trip to the Postseason:

As you can see, there are many valid arguments to help support the Eagles cause in being a playoff team. In Philadelphia, they judge teams by character and competition, two things this team strongly possesses. The year started out as a rebuild in progress, basically everyone looking ahead to the draft. Fortunately, for the city and its fans, Chip Kelly has comes as advertised and turned this town in to a frenzy once again!

****As always I appreciate all comments and feedback….you can follow me @TCutillo23.