As the 2012-13 shortened season approaches,  there has been a passing of the torch in Philadelphia sports.  Chris Pronger,  who has stepped aside because of the lingering effects of post-concussion syndrome,  has passed his confidence on to Claude Giroux to lead the Flyers on the ice.  We have seen many captains pass through this city,  with the l

ikes of Eric Lindros,  Bobby Clarke, and  Rick Tocchet,  who have shown us what it means to bleed Orange and Black.  If the infamous Game 3 hit on Sydney Crosby is any indication on how he chooses to lead by example,  I think we are all in for a treat.

The Captain label is very important in the game of Hockey,  not only because of the tradition and values it stands for,  but for the pure leadership it requires.  It seems like the Philadelphia Flyers did not expect this from Giroux,  when they drafted him in   the 2006 NHL Entry Draft  22nd overall because of the simple fact  that the draft is always full of surprises.  After some growing pains along the way, being bounced around to the AHL,  Giroux looked to turn things and stared to blossom into a future superstar of the ice.  This sudden rise to stardom, after much inconsistency along the way,  led GM Paul Holmgren to make a historic decision to trade away Jeff Carter and Mike Richards in the 2011 off-season, leaving Giroux to take over the role as first line centre for the club.  At the time, this looked like an extreme act of uncertainty,  but looked ingenious int the end as Giroux ended the season  Giroux ended the season as both the Flyers’ top regular season point-scorer (93 points) and top playoff point scorer (17 points).

Usually the offseason is filled with rumblings of potential free agent visits and breakdowns of numerous trades,  but 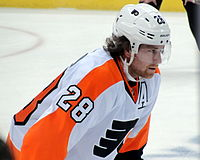 this one was filled with emotion, angst,  and disappointment, due to the NHL Lockout.  With the lockout behind everyone,  now is the time to focus on the trials and tribulations of the upcoming season.  While many teams are still trying to decide on their roster,  the Philadelphia Flyers were busy making their 25-year-old phenomenon the center piece of their organization.  As a professional Hockey player, your emotions are always worn on your sleeve and taken out on your opponent.  As evidence in his play,  Giroux always played with notorious pride and emotion,  but now it will be forever acknowledged by the presence of his patch!!!!!!