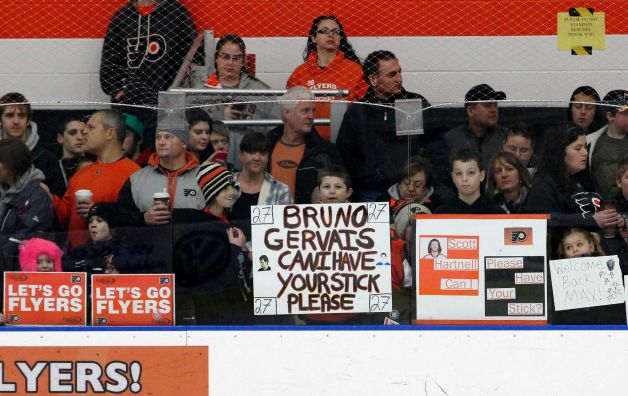 The City of Philadelphia is known for its passion,  history,  and fan base when it comes to our sports teams.  I dare anyone,  in any city,  to try and compare to the likes of the Orange and Black Sea that is called the Wells Fargo Center.  We cheer,  boo,  and tell you exactly the way we feel,  which is why we sometimes get a bad reputation.  The national media loves to portray us as animals and derelicts,  instead of the intelligent fans that we actually are.  However,  there is nothing but positive feedback to be heard from the way the fans congregated to express their support at the first official practice of the 2012-13 season.

Organizationally,  the Philadelphia Flyer brass,  shows their love back by making every effort possible to put a winning product on the ice.  Within minutes of the 202-13, 48 game schedule being released,  General Manager Paul Holmgren,  was already working the phones to complete his first transaction of the season.  The Flyers acquired Goaltender Brian Boucher and defensive prospect Mark Alt from the Carolina Hurricanes  in exchange for prospect  Luke Pither.  Granted, it’s not the most exhilarating move,  but something to show the fans they are never done trying to improve the roster.  In the day and age of free agency,  Flyer’s Chairman Ed Snider,  is never ashamed or hesitant to write a check to express his desire for a winner.  He is always visible and doesn’t shy away from the spotlight.

As you can see,  the Philadelphia Fans will always be there to support their team through the good times and bad.  They are always behind the glass to show their feelings in the way of signs and emotions.  Consequently,  the franchise has shown, in leu of their continuous support,  they will always be willing to do everything necessary to try and book another trip down Broad Street!