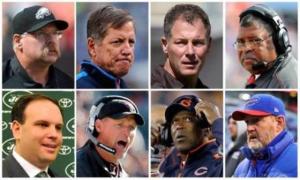 The ball dropping in Times Square signifies the start to a new year, along with sealing the fate of many NFL Head coaches.  Coaches in the NFL do not have any easy job, but do get paid very handsomely to do it. They need to deal with the every day struggles of the modern day athlete, while trying to please the owner who is writing them their big checks. Every year there are a number of coaches who are released based on the fact that their message has gotten stale or stagnate, for which the owner feels is time for a change. Change is not easy, but sometimes is needed in order to breath new life into an organization that  is on life support or has been on steady decline.

The next part of the decision is the most important one. The one that will make or break your franchise. The one that can take you to the promise land or set your team back another 5 years. Commonly, the argument that arises is, do you go college or not. Every owner is always looking for the next big thing and doesn’t want it to pass them on the way to excellence. The problem is, college rank coaches can be either hit or miss, sometimes they work out and sometime they do not. Most college coaches that have been successful in the NFL have done it on their second stint in the league ( Pete Carrol). Unfortunately, everyone always seems to remember the collapse of Steve Spurrier, and seems they don’t want to be next.

The NFL is an always evolving league, that demands some risk taking in order to be successful. Sometimes these risks, culminated with a few bad breaks can turn a franchise in to misery, but they also can work to turn things into dynasties. Therefore, the decision to make a coaching change in the NFL is definitely a tough one, but the decision to bring in a green, inexperienced college coach could be even tougher!

2 thoughts on “Coaching Carousel in the NFL”